And he said to all, “If anyone would come after me, let him deny himself and take up his cross daily and follow me. For whoever would save his life will lose it, but whoever loses his life for my sake will save it. For what does it profit a man if he gains the whole world and loses or forfeits himself?

Our modern perspective makes it tough to understand how uncomfortable and offensive Jesus’ words in today’s verse were.

In our culture, we often relegate the cross to being a good luck charm. A stylish piece of jewelry, a cool tattoo, or a symbolic piece of art to hang on a wall.

Even in Christian circles we’ve sanitized our perspective of the cross with pictures of a smooth-skinned Jesus with little more than trickles of blood.

In their time, they considered it the most painful, gruesome, and shameful way to die.

Moral Roman citizens didn’t talk about it, and the ancient Jewish historian Josephus called it “the most wretched of deaths.”

Jewish people had witnessed literally thousands of their countrymen crucified on hillsides, so their picture of the cross was radically different from ours. 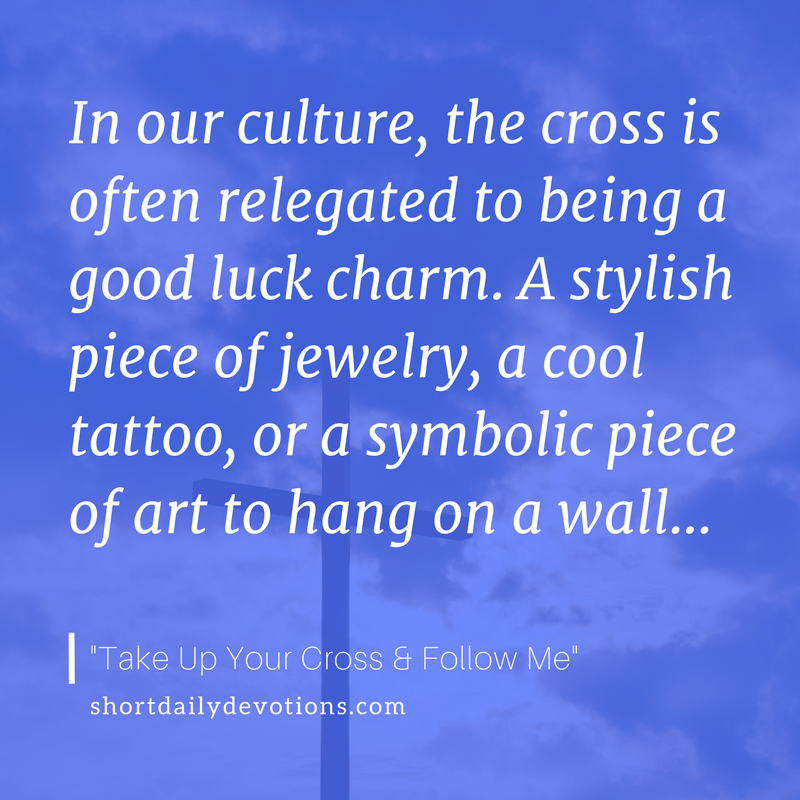 The Roman’s purpose behind crucifixion was simple: to provide the most painful, gruesome, and publicly shameful death imaginable. It was a terrifying way of ruling by fear.

They forced the condemned person to carry the horizontal portion of the cross, weighing about 110 pounds, through the streets in a procession to the place of execution. As the condemned would walk the streets people would scream insults and spit as he walked.

Historical Roman accounts have established that rough seven-to-eight-inch nails were driven between the small bones of the wrists, rather than the palms. The soldier would then take the left foot and press it backward against the right foot, and with both feet extended, toes down, they drive one nail through the arch of each, leaving the knees moderately flexed.

The condemned are now crucified.

This is the picture they saw as Jesus spoke the words from today’s verses.

As we let this sink in, it should assure us that our journey was never meant to be easy.

Re-read the verse and reflect on what it means to you now. How does this change the way you approach following Jesus?