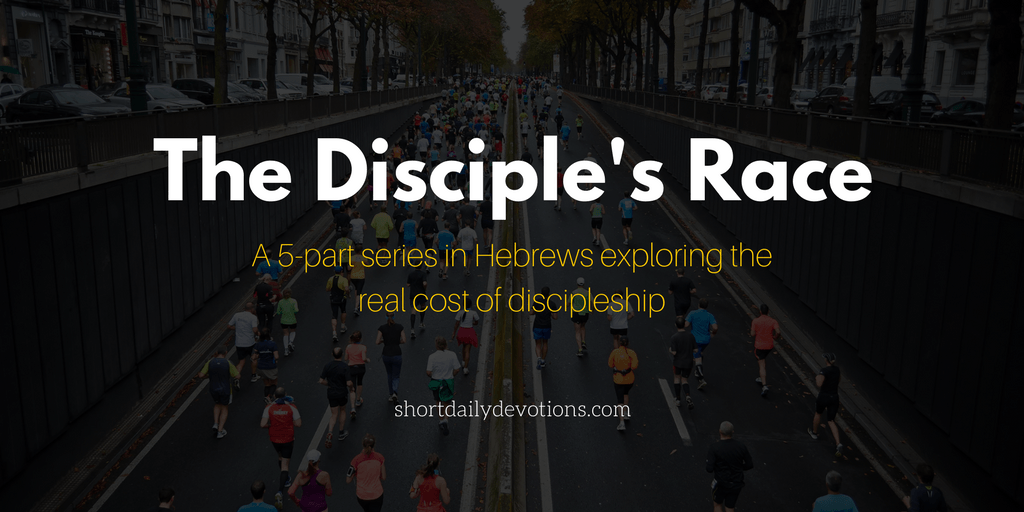 Imagine standing at the center of an Olympic stadium packed with a roaring crowd 60,000 people strong.

The eyes of the watching world are on your team, and it’s game time.

This is the imagery we find in today’s devotional verse. It paints the picture of epic Olympian competition as a metaphor for the disciple’s race.

Therefore, since we are surrounded by so great a cloud of witnesses, let us also lay aside every weight, and sin which clings so closely, and let us run with endurance the race that is set before us,

The Great Cloud of Witnesses

First are the roaring crowds.

Some believe the great “cloud of witnesses” refers to the saints described in Hebrews 11. However, another angle is that these witnesses embody the onlooking world.

The spectators that fill the stadium, watching the Church and her deeds.

This interpretation fits well given the context of this verse, because the writer continues with Olympic language.

He writes that the disciples should “lay aside every weight, and sin which clings so closely…”

(This would have been well-known to the readers of this letter. So the metaphor would have connected with them.)

The idea was this would ensure a completely level playing field. No athlete would have the advantage of grabbing ahold of someone’s clothing. And neither would they have the hindrance of clothing tripping them up.

The author is saying that we, just like those naked Greek athletes, need to shed the spiritual clothing that inhibits us.

First, there are weights in our lives that may not be explicit sin, but still hinder us.

For me, this has been caring *way* too much about what people think of me. Sure, you could argue that this becomes sin as a form of idolatry… But it’s not something we would generally lump in with the obvious stuff like lying, stealing, and the like.

You see, it’s a needless weight that trips me up and inhibits me because it can lead me to sin.

I hate to admit it. But there are many moments in my life where I’ve kept silent when I knew the Holy Spirit was prompting me to speak. I did this because I was worried what people would think.

That was evil of me. It was sin. It was disobedience to God himself.

And my concern about people’s opinions proved to be my snare.

So, the author of Hebrews is telling people like me: “Take off that extra baggage! Throw it aside so you can compete without hindrance. The competition is hard enough without adding an extra obstacle…”

Next, the author confronts sin directly.

They are to lay aside the “sin which clings so closely…”

Have you seen the spandex undershirts athletes wear beneath their pads or uniforms?

That’s the image of the sin, here. It’s the stuff that sticks to you like a second skin.

It’s the stuff that perfectly molds and contours to your body you almost can’t imagine yourself without it… The stuff you’ve decided, “I’ll never get over this…” The sin that’s almost become part of you.

And if you’re reading this, it’s time to rip it off!

You are called to the freedom of naked discipleship.

It’s time to drop the spiritual weight so you can run the disciple’s race with endurance. Unhindered with the things that trip you up and cause you to stumble.

Learn to throw off your sin with these resources: