(This devotion is part two in the series: “How to Be Changed Like Paul.” Check out part one if you missed it.)

The secret of Paul’s greatness is that he was first a “servant” and second an “apostle.”

The Greek word for “servant” can also be translated as “bondslave.” Here’s the deal, Paul didn’t think about himself first as an authority figure or leader—he viewed himself as someone totally under the orders of his Master.

In the Church, we spend a lot of time on becoming better leaders. Leading well is definitely a good thing! But if we take a cue from Paul, we see his leadership flow not from personal achievements or discipline (though he had these LIKE CRAZY!). Instead, he walked in incredible spiritual authority because he submitted himself to the greatest authority—Jesus himself. 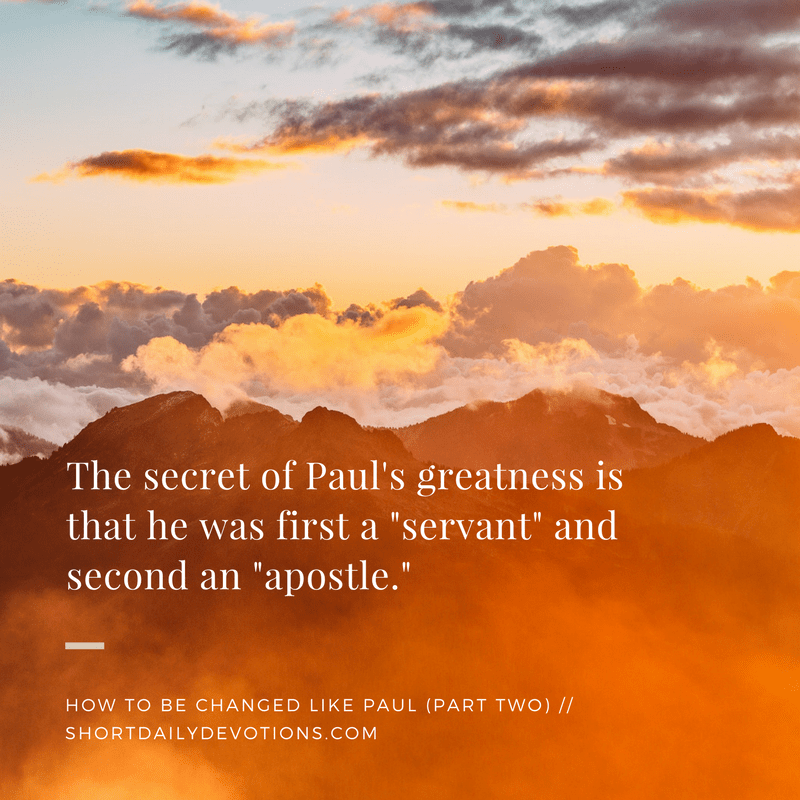 To understand and emulate Paul, we need to focus his relationship with Jesus before we look at his feats of faith.

Like we discovered in part one of this series, Paul’s old life was spent mercilessly persecuting Christians as a devout Pharisee (Acts 8:1; Phillipians 3:5–6). And now, he’s writing a letter to a Gentile church in Rome…

So when we read today’s verse, we should be astounded that Paul submitted to the authority of a man killed as a Jewish blasphemer and heretic—Jesus of Nazareth.

That is the power of the gospel to change people—to change us. There is no power greater and no heart too far. What an encouragement—and challenge to my limited beliefs—the life of Paul is. The gospel can change any heart, any time, anywhere.

The heart of Paul’s ministry is his intimacy and obedience to Jesus. He was a man under orders, not in control of his own life and destiny.

He was a servant before he was a Saint. A man who gave up control of his life; who modeled what it means to submit to Jesus as Lord.

Are you a servant of Jesus? And more importantly, do you live like it?